I'm trying to build a model that includes a Stackelberg game of a supplier and a retailer, the latter facing stochastic demand.
My idea is a combination of bilevel programming and stochastic programming, both supported by EMP.
The code I've created so far is running. The solution, however, isn't right.
I suspect that the follower's objective function is being optimised only in the first scenario, as his sales quantity in each scenario is equal to the demand in the first scenario.
Although, the equations are getting solved, i.e. the non-decision variables are correct.
Is there a way to combine bilevel programming with stochastic programming via EMP?
Is there another (if EMP is working more powerful) way to model the mentioned scenario?

P.S.: I'll post the code, if you need it. It's a bit chaotic right now as I've tried changing the order of statements, which sadly didn't have any effect.
Top

after a few tests I believe, that the follower's objective function isn't being evaluated. This was tricky to find out since the optimal value of his profit, and obviously the lower bound, is zero.
As I said before, both, the bilevel programming and stochastic programming worked on their own. So I decided to delete the stochastic programming with EMP and to use the expected value. Et voilà, it works.

I'm nevertheless still interested in your best practice methods on Stackelberg competition in combination with a Newsvendor problem. So I can learn from your experience.

Hi, I working on a stackelberg game, would you mind sending me some example about stackelberg simulation? Amiraub90@gmail.com
Top

If you do a search of the GAMS User's guide for Stackelberg you get a couple of hits that give lots of relevant info. I attached a screenshot of that for you.

Also, check out the EMP library: it's full of Stackelberg games (aka bilevel optimization): 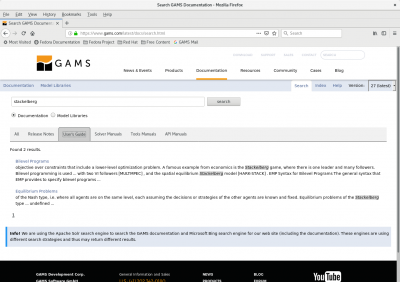